Forbes publishes a list of the most powerful brands. The top brand is Apple, followed by Microsoft, Coca-Cola, IBM, Google, Intel and McDonald’s. The value of the Apple brand is pegged at around $87 billion, accounting for around 20% of its current stock price.

Many B2B brands believe they can ignore branding altogether, choosing instead to carefully target the audience that will buy their products. By investing the majority of their resources in activities like SEO, direct mail and telemarketing, B2B marketers can avoid marketing toward people who are unlikely to ever buy their products.

But the most powerful B2B brands still invest money in pure brand advertising. Almost everyone has heard of SAP or Oracle, even though the brands target their message toward senior decision makers at large companies. While it’s unlikely that anyone is going to buy Oracle hardware after seeing a print ad, the idea is that the advertising will soften up the customer for a future sale. When the customer is ready to buy, Oracle will be the first company that they contact. 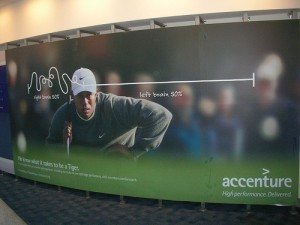 Accenture is a global consulting firm. It knows that senior decision makers are likely to travel a lot on business, so it spends millions each year on advertising at the world’s airports. When you look at Accenture’s campaigns, there are no calls to action. They don’t even ask you to visit a website or call a number. All they want you to do is engage with the advertising. Then, the next time you’re looking for global delivery consultancy or to develop your cloud strategy, hopefully you’ll contact them.

One of the greatest B2B marketing success stories has to be Intel, with its strategy of targeting consumers directly. Everyone had assumed there would be little point in branding semiconductor chips, especially when the vast majority of people don’t have the faintest idea what they do.

Before Intel’s approach, consumers would buy computers based on a recommendation from a friend, the amount of RAM or the size of the hard disk. But Intel tried to persuade consumers that it was the chipmaker that made your computer perform better. It was a great example of how you can use the power of brand recognition to build a protective moat around your business. Learn more about it from Halo.

“I first became aware of what they were doing in 1993, when I met with Intel executives to discuss their International CES participation,” writes Gary Shapiro for Fast Company. “They described a plan for a remarkable exhibit at the show that year, a centerpiece of their effort to shift the image of Intel from that of a chip company to that of a producer of a coveted, brand-name product that stood for performance. The display Intel was planning was so elaborate that we actually had to work out a deal so they could occupy the same exhibit space they would be using at another show taking place a month and a half earlier.”